Endings, from a storytelling perspective, are complex.  Writers often remain paralyzed for ages attempting to provide a suitable closure for their creations.  Real life, however, has found an elegant way to bypass this literary problem: it simply changes, or demands that we do.  Its character arcs are flawed, and don't do justice to the time readers have invested in them.  Many people vanish from the story altogether, though their last scene gave no such indication or foreshadowing.  Loose ends, far from being tied up, are left in tatters on the desks of the unlucky editors of the subconscious.  Chekhov's gun remains above the mantle, new dilemmas replace the falling action, and the plot moves like a fever dream into uncanny terrain.

Writers do not live in the real world*, however, and therefore suffer from a compulsion of point-making.  When their points are inevitably contradictory, they bail themselves out by citing terms like "irony," or by quoting Walt Whitman.  This need for meaning is acute, and must be found even where it does not exist.  Or rather, especially where it does not exist.

To this end, our author sends his apologies to both of his audience.  Through his convoluted logic, he has convinced himself that he will find meaning in his crisis of writer's block by succumbing to it.  Part four of his mildly exalted "Hitchhiker's Guide to Albania" has therefore been cancelled, despite the misleading title of this post.  You might be thinking, "Didn't he leave Albania over a year ago?" and if so, kudos, but kindly direct your valid criticism toward someone more relevant**.

As his editor, I disputed this inaction tenaciously, but being reminded that I am merely an unappreciated shade of a duressed mind, I conceded.  The research team assures me that he is "doing well" in his Ukrainian quarantine, and that as a history teacher can find inspiration by imagining his apartment is a gulag for some well-to-do dissenter of yore.  Also, Netflix.

Hey, everyone.  Mom.  Someone else, probably.  So, my last boss was a psychopath.  And I'm in Ukraine now.  And there's Covid.  There is literally no way to bridge all of that, so please accept the ramblings of the pesky editor of my subconscious (or so it calls itself) and let's move on.  I introduce you to:

"The Hitchhiker's Guide to the Confines of 1000 Square Feet"

"I Wanted To Develop Hobbies, but I Just Got Fat"

don't take this out on sourdough...

"Russian Is Really Difficult on the Phone"

somehow your only decent suggestion...

Okay, it's a work in progress.  If the Washington Football Team can do it to make you forget decades of unforgivable racism, give me a few minutes to figure this out.  Catch you soon.

I’m not sad,
I tell everyone.
And it’s mostly true.
I’m whatever I’ve
always been, but
now my mask lies
broken at my feet
in sweet-smelling chunks
of fiction.
I’m too tired to fix it,
though everyone
can see now
how little I’ve kept.
Just some odds.
And some ends.


But who can smile
like before?
Before what, it
doesn’t matter.
Before him, or her, or them,
and all their
counterfeit futures;
before the carnage
of understanding that
most crimes are simply
endured. Before
the after.


No, I’m not sad,
I tell everyone.
I’m spare;
a collection of only
the most dangerous hopes,
marched two-by-two
onto this ark,
waiting for the warring tides
to recede. For the
doves to return.
For the chance to
nourish, not survive.
And I can’t be wrong;
I don’t have enough left
to try again.

In the hollow
of who I was,
carved from what
was lost
or incidental,
I curate my collection
of misfit dreams.

Delicately,
hopefully,
I weigh each one
against the jetsam,
knowing that this
has cost me
everything.
Posted by Misfit Sheep at 10:38 AM 1 comment:

I would be yours,
and you could be mine,
unbroken across
a thousand promises
to the eager horizons
of tomorrow, and tomorrow.
But let's not call it
forever, and
let's not say it's
the same thing.
Posted by Misfit Sheep at 7:04 AM No comments:

The Woods of What's Left

I can no longer tell
what love is and isn’t,
and anyhow
I’d only do something silly
if I could,
like trying to hold it,
until I rip
once more along that
old fault line of hope
and fear.
I think I’d rather let
the question dissolve
in the warmth between
our hands, and just keep
walking through these
patchwork woods
of what’s left of you, and
what’s left of me.
Posted by Misfit Sheep at 2:22 AM No comments:

How deeply
will my roots grow
in this new soil?
Will it finally
be time to
call something
home?
Is the only difference
between
a weed
and a wildflower
where it grows?
Posted by Misfit Sheep at 5:12 AM No comments:

A Trick of the Light

Parsecs away
from your pull,
love's event horizon
now looms;
the edge
of the black hole
we instead
fall out of.
It waits,
ready to annihilate
our fairy tale;
a flash,
a trick of the light,
and our treasured moments
will be revealed
as ordinary.
Already,
you are a word
too often repeated,
warped and
stretched thin
across these failing
memories, leaving
only who you are,
but nothing of who you were
to me.
Posted by Misfit Sheep at 5:10 AM No comments:

"Camerado, this is no book, Who touches this, touches a man" - Walt Whitman 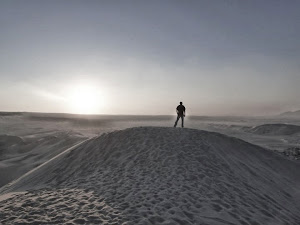